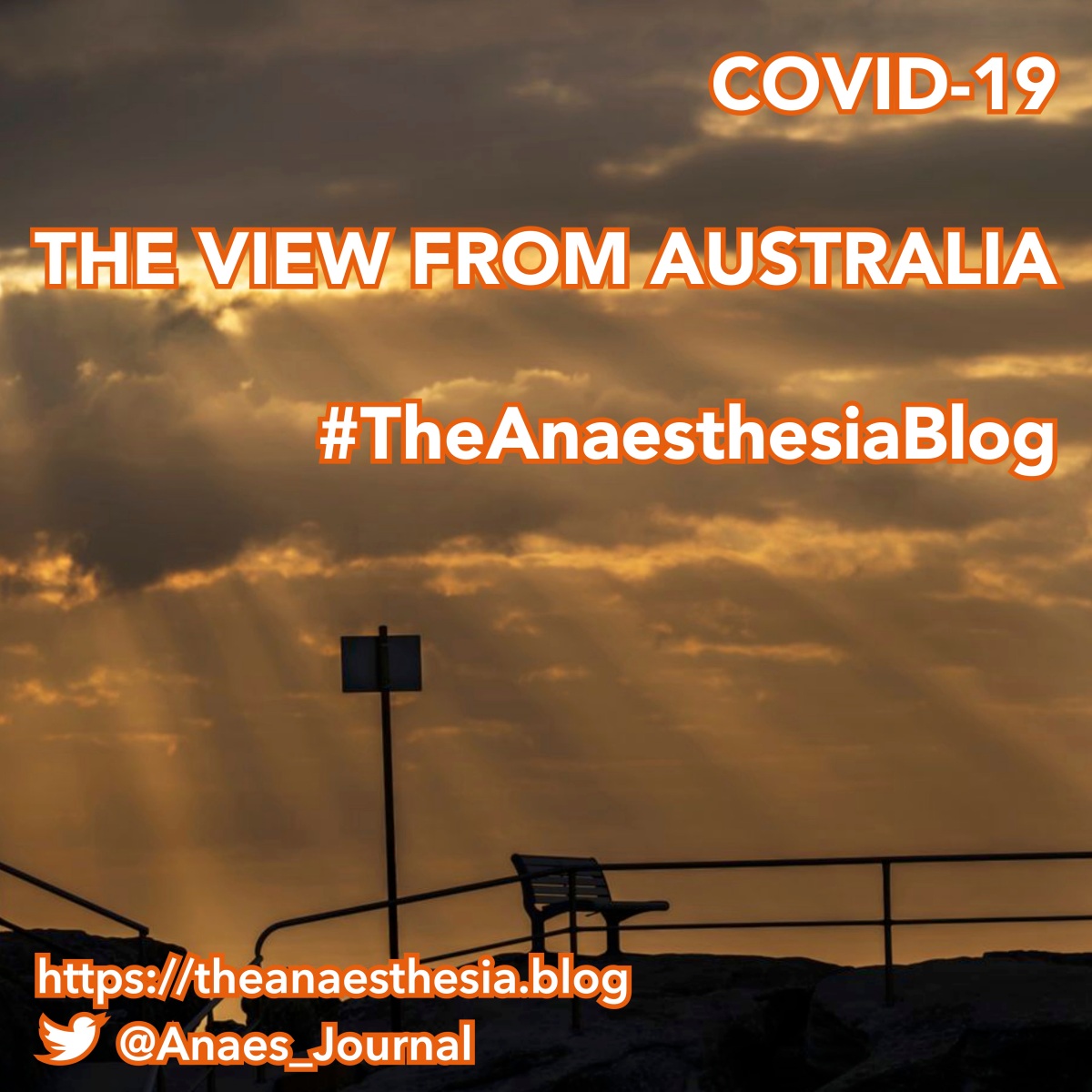 Australia had its first case of coronavirus on January 25th, and as of today there are 376 confirmed cases with many test results pending. Cases are doubling every three days, with modelling predicting 153,000 cases by Easter. Australian case numbers more closely align with the experience in Europe, rather than the slower case doubling time in Korea and Singapore. I work in Wollongong, a town south of Sydney in New South Wales with a population of 400,000. If conservative models are correct and 20% become infected, with 5% requiring critical care, this equates to 4000 patients, which is in addition to the usual caseload. We have around 20 critical care beds.

Until recently, health care professionals and the general public have been largely indifferent to the disease. This is despite widely reported experiences in China, Korea, Iran and Italy, with exhausted frontline clinicians imploring us to prepare. Many felt that this disease was ‘just a mild cold’ and that although there were many deaths, these were limited to the frail, elderly and those with medical comorbidities. There was full confidence that the Australian medical system could manage the disease, as it has world-class people and resources. Most seemed to think that this would not impact us. Many were still laughing at toilet paper jokes and coronavirus memes. Some still are.

The mood is rapidly changed. There are increasing numbers of clinicians, medical administrators, politicians and members of the community becoming fearful and frantic. Clinicians in particular have been motivated into action following the Italian reports of overwhelming numbers of critically ill patients and deaths. The exponential growth in case numbers and the subsequent social distancing measures introduced by the Australian government yesterday have also increased the impact of the disease. Legislation will enforce the banning of organised mass gatherings of over 500 people, and self-isolation for all travellers from all countries for 14 days, echoing New Zealand’s move to this the day prior. New Zealand has fewer cases yet has been more proactive. Perhaps the recent White Island Volcano tragedy has made them less willing to become overwhelmed again. Awareness was also raised by Hollywood stars Tom Hanks and Rita Wilson, who tested positive and were admitted to Gold Coast University Hospital last week. The government has announced a multi-billion-dollar stimulus package to address the widespread economic devastation the disease will cause.

The looming disaster is slowly dawning on regulators, administrators and community members. Most Australian hospitals have been slow to act and are only now beginning to look seriously at the logistics of the likely tsunami of potential patients.

Practical difficulties in accessing COVID-19 testing for the public and healthcare workers have led to many frustrations. Some wait up to five days to get tested, and streamlined testing clinics are just starting to appear. The public health advice around testing has changed as the data comes to hand, and is currently limited to those with symptoms and a contact or relevant travel history.

From my own Twitter activity, I noticed and wondered why international colleagues were shaving beards. This led me to discover the much more serious approach to PPE adopted in other countries, particularly those who have experienced respiratory outbreaks before such as Canada. Formal fit-testing of N95 masks is not mandated in most of Australia and New Zealand. Very few have ever heard of fit-testing, let alone formally had it done. I suspect that Australian guidelines for PPE when we are post-COVID will reflect the more pro-active approach adopted by countries who have been here before.

There have been concerns around the ability of institutions to supply sufficient PPE. Although state and federal governments have announced funding for PPE, individual hospitals have not completed stocktakes of equipment. Most do not know how many COVID and other emergency patients they can care for. Few have received training, although this is now starting in earnest for some, with others told that there is insufficient gear to rehearse. Although a few units have conducted simulations, they are in the minority. There are a number of different management guidelines and few institutions have agreed on approaches between departments.

The management of patients requiring elective surgery is becoming increasingly topical. Elective surgery targets are highly politically driven and direct activity in hospital, sometimes at the expense of emergency surgery. It has been very difficult to shift this mindset. In fact, the state of Victoria has announced an ‘elective surgery blitz’ prior to the arrival of the COVID-19 peak. This is difficult to understand in view of the lack of preparedness and the anticipated patient numbers with the impending healthcare crisis. The Australian Society of Anaesthetists has recommended postponement of elective surgery in order to allow preparation time, as have the Royal Australian and New Zealand college of Obstetricians and Gynaecologists. The Royal Australian College of Surgeons have called for surgical fellows to ‘follow local hospital requirements’ around elective surgery and ANZCA is yet to comment specifically on the matter.

Over the last week, medical conference organisers have one by one made difficult but necessary decisions to cancel their events, including the largest anaesthesia event of the year, the ANZCA annual scientific meeting in Perth. Smaller hospital meetings continue, although some clinicians have cancelled. The medical viva part of the ANZCA final exam was cancelled last weekend, and there are concerns about education implications of the crisis for fellows and trainees with diversion of work and cancellation of CPD activities.

Many individuals have cancelled overseas trips for the upcoming school holidays and Easter. Some clinicians are now stranded at home in self-isolation requiring the cancellation or rescheduling of clinical work. Panic buying continues with difficulty accessing toilet paper, hand sanitisers, pasta, and meat. A supermarket chain has introduced an early morning quarantine shopping time for the elderly and vulnerable to protect them from the masses.

Although some schools who have had members test positive for the disease have closed briefly, schools have largely remained open. The rationale for this from public health is that it may do more harm than good. School closures may cause children to be cared for by their grandparents, who are vulnerable to the disease, or parents who are healthcare workers and other essential services and may be unable to present for work if children are at home.

Key clinicians have been employing social media channels to advocate for governmental action. There are a number of private groups also which are sharing information and getting organised. It has been difficult to keep up with official advice from state and federal government, the hospitals, professional societies, my children’s schools and co-curricular activity providers, my private and public social media. Information overload has been particularly difficult with the rapidly changing nature of this epidemic and the ever-increasing need for information.

Pleasingly, there has been the rapid production of a number of excellent educational resources from those who have experienced previous epidemics, and those who are currently in the thick of it. Resources have been shared widely and freely on public and private social media sites. This crisis has demonstrated the value of social media where healthcare workers across the world have generously supported each other with information, advice and moral support in real-time.

I repeat and reinforce the advice of Prof Tim Cook and Dr Kariem El-Boghdadly for healthcare workers to familiarise themselves with their institutional PPE policies, practice and train for the management of COVID-19 patients, and agree robust local procedures for the pandemic. I also implore institutions to increase preparedness by postponing non-essential elective surgery, arrange training in COVID management, release all non-essential staff to protect their health and assemble groups of multidisciplinary leaders to organise and lead institutions. We must work together. We have no time left.

4 thoughts on “COVID-19: the view from Australia”

NEW! May 2020 Podcast with @doctimcook and @STHJournalClub. Personal protective equipment during the COVID-19 pandemic.