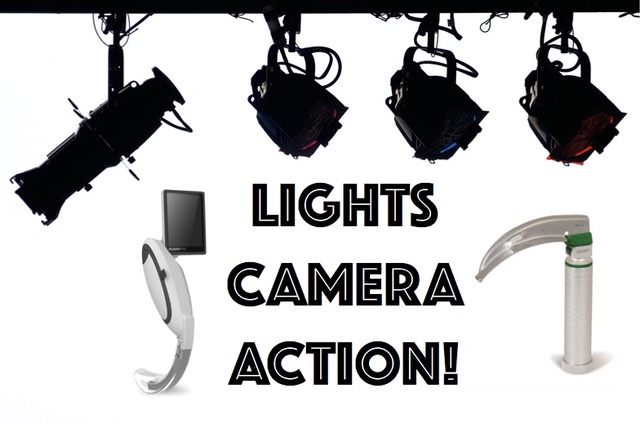 This month in Anaesthesia sees a welcome addition to the above in the form of a systematic review and meta-analysis of VL vs. DL use by experienced anaesthetists in patients with a known difficult airway. The authors retrieved 9 articles with a total of 1329 patients and concluded VL to be associated with greater success at the first attempt, even with an experienced DL operator (OR 0.34 [95% CI 0.18-0.66]). In addition, VL yielded fewer Cormack and Lehane grade 3 and 4 views (OR 0.04 [95% CI 0.01-0.15]) and less mucosal trauma (OR 0.16 [95% CI 0.04-0.75]). The question remains however, should VL become the standard of care for the initial approach to intubation in the context of a known difficult airway? We would very much like to hear your opinions on this one! Get in touch with us through Twitter or Facebook.

Keeping with the VL theme, Abrons et al. report an RCT of asleep VL-assisted nasotracheal intubation using either a bougie (Figure 1) or non-bougie technique. They found a significant reduction in the incidence/severity of bleeding and trauma to the nasopharynx with the bougie technique, though with no difference in first attempt and overall success rates. For those who regularly perform nasotracheal intubations, will this study change your practice? Let us know!

Figure 1 The tracheal tube (red arrow) is seen advancing over the bougie.

Uncontrolled haemorrhage in trauma is a major problem, as mortality in such circumstances approaches 50%. In their editorial, Nevin and Brohi describe the evidence for and the clinical applications of permissive hypotension for active haemorrhage in trauma. It is difficult to conduct primary studies to support such practice and the evidence base is necessarily sparse and of low quality. In general, whilst permissive hypotension may be physiologically undesirable in the short-term, they argue its use has almost certainly contributed to improved long-term outcomes for such patients.

When uncontrolled haemorrhage presents in addition to a traumatic brain injury however, the evidence for permissive hypotension is more so limited. In his accompanying editorial, Matt Wiles argues that hypotension should be a trigger for aggressive management in the trauma patient with a suspected head injury and only permitted for as short a time as possible. Rather than liberal crystalloid resuscitation, he argues management should consist of normalisation of coagulation with haemostatic resuscitative measures, avoiding hypothermia and acidaemia, and rapid transfer for definitive management. Additionally, an individualised cerebral perfusion pressure target should be achieved with small volume fluid boluses and vasopressors. There are no easy answers here and we require more evidence, difficult though it may be to generate.

From VL vs. DL to permissive hypotension in traumatic haemorrhage, this month’s edition is packed full of controversial topics! Continuing the theme, Lei et al. report their RCT of cerebral oximetry and postoperative delirium in 249 cardiac surgical patients. All patients received rScO2 monitoring, but half were randomised to algorithmic treatment for rScO2 below 75% of the baseline value for 1 minute or longer. For the control group, the rScO2 monitoring screen was electronically blinded. Although postoperative delirium was reported to be associated with baseline saturations ≤ 50% (p = 0.0001) there was no difference between intervention and control (OR 0.98 [95% CI 0.55-1.76]). In their accompanying editorial, Kunst and Milan argue whilst there is observational evidence to support the predictive power of cerebral oximetry together with its intraoperative algorithmic optimisation, there is little evidence yet that such measures affect clinical outcomes in cardiac surgery. Rather than a ‘deadly blow’ to non-invasive cerebral monitoring, they argue the equipoise demonstrated by Lei et al. is complicated by several limitations. When you consider the lack of evidence for the use of pulse oximetry with regards clinical outcomes (and we certainly couldn’t do without that!) it begs the question, will we ever be able to prove the utility of cerebral oximetry through traditional research methods?

Keeping with the cardiac theme, there are several scores available to predict mortality in such patients (though scoring systems and risk estimation have well described weaknesses). If the long-term postoperative risk prediction is greater than preoperative estimates, is this indicative of an adverse intraoperative event such as a stroke, AKI, sepsis or a gastrointestinal complication? Currently, there is no method to capture adverse intraoperative events and/or determine their effect on long-term survival. Coulson et al. term this the ‘acute risk change’ (ARC) and derive its value from the difference between the preoperative AusScore (analogous to EuroSCORE-2) and the postoperative APACHE-3 score. They found the ARC to be associated with long-term survival at 1 and 5 years but argue this could be a function of noise, adverse perioperative events and/or unmeasured patient risk.

In his accompanying editorial, John Carlisle asks whose fault are wrong predictions: the clinician, the patient or the pigeon? (Though rather than the pigeon, mortality after cardiac surgery is primarily determined by the patient and to some extent, the surgeon.) In addition to offering an alternative statistical interpretation of Coulson’s results, he argues our understanding of perioperative mortality would be greatly improved by developing a single model common to all patients and all operations with the ability to accommodate additional information as the patient progresses through their perioperative care.

Elsewhere this month there is a retrospective study of ketamine administration and the development of acute or post-traumatic stress disorder in 274 war-wounded soldiers, a study of neuromuscular blockade and the efficiency of facemask ventilation in patients difficult to facemask ventilate (another controversial topic!), a study of the association between pre-operative variables and complications after oesophagectomy and Miss Method Matters explains how to compare times in clinical studies with a finite ending.

Finally, this being our Christmas edition (apologies it is the middle of November!) we are delighted to publish our second annual Christmas article, the FARCE study! You may remember CRAC-ON, our first Christmas article as published last year. This year however the question is, what is the association between critical care nursing staff emotions and their surrounding environment as assessed using the ancient system of feng shui? Although feng shui as applied to critical care bed spaces appears to have no effect on the feelings and inner harmony of nursing staff, one conclusion is that simple measures such as an impromptu cake or a simple friendly hello can increase a person’s chi score. We are therefore going to spend the rest of the day doing just that!

POCUS of the brain is an effective, non-invasive, safe and readily available technique for the rapid assessment of cerebral anatomy and cerebral haemodynamics in patients with acute brain injuries.
Acute ischaemic stroke is a neurological emergency.
COVID-19-associated delirium is different to classical delirium.
What better way to see in any new year than with a brand-new Special Supplement!
A chronic SDH is a collection of altered blood products formed beneath the dura.
🔐Nocebo refers to non-pharmacological adverse effects of an intervention.